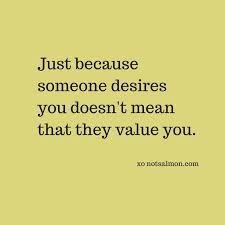 I guess the saying on the left could apply to women and to men but women are quite a bit more pre-meditated in choosing which men to talk to and then sleep with. Our lust does not control our rationality, much to men’s dismay. Sometimes mine does but I’m working on curbing it now that I realize men fall in love easier than women do, even it’s just our breasts they’re in love with.

This is especially the case for women of reproductive age.  So mostly, this applies to women. Just because a man desires you doesn’t mean he values you. For men, this could say, “Just because a woman likes to talk to you doesn’t mean she values you or loves you.” If people are not possessions then relationships with them cannot be assessed like an insurance adjustor would assess the damage done to a car. 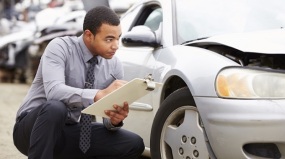 I’m following up on my previous post “Bonding Instead of Possession”, and suggesting a compromise between men’s dualistic approach to relationships which is either promiscuity or possession. Analyzing a relationship is not akin to being an insurance claims adjustor. It’s a matter for your HEARTSET to assess the situation which entails your feelings and then use intuition since feelings only lead to intuition which is the higher mind. No one is called to act on, indulge, or hold on to their feelings. Feelings are supposed to lead to the movement of Mind and Heart so we can make informed choices. You can’t leave out Heart or Mind or it will fail. That’s the whole point of knowing your feelings and it’s not minor. The Intuition leads to the higher mind and the Rational leads to the lower mind. One is fast, one is slow. I didn’t figure that out, the scientists did, nor do I really like the situation but that seems to be the way the brain is laid out for now until we evolve differently.

Promiscuity or possession is an all or nothing approach, a decisive approach that actually is emotional, even passionate based on physical lust, need, and desire, not love. Why is it considered normal and acceptable for men to not want a relationship but not women? Many women, including me, like being single, but I like friendship, love, and sex but I don’t want to be in a relationship. I like my absolute freedom and need it. I also like monogamy but only if the man doesn’t go overboard. Can a man process all of that and accept that I don’t want to possess or control him and he can’t possess or control me?