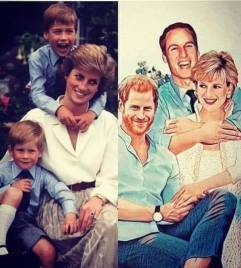 According to this picture, being physically alive is not a prerequisite to feeling bonded. Think about that. This is a common human experience all over the world; feeling the presence of and emotional bond to an ancestor who has died. Working with clients, I believe the emotional-spiritual bond humans feel to one another, family or not, are much stronger than the physical bond and certainly don’t include possession.

Shared values, personal affinity or sameness, sexual affinity, and complementary differences help us bond. If you’re reproducing at a young age, similar family upbringing and just basic lust, bond you very strongly to a person causing you to feel possessive. Just because you feel possessive doesn’t mean you actually can possess another human being. Human possession is actually slavery. People do buy one another mostly for sex and for employment. The latter is illegal and the former is not.

A physical lust bond is actually very essential in young couples for successful reproduction. The more sex you want to have and do have the more likely it is you’ll conceive. That said, once a woman has a child, her lust or desire for her husband markedly decreases and her emotional bond is super strong to her child just due to evolutionary mother love in the human brain. It’s actually the strongest type of real love on the planet as I think we all know. Mothers love their children with superhuman might. Fathers do too but it’s different since they didn’t create the baby in their body. I adore my son. I feel more bonded to my son than anyone on the planet and when he’s around it’s as though a part of me is in the house. That can actually be a pain in the butt because we’re very similar. My brain and thus my behavior goes into mama role. It’s very bizarre to observe in myself and feels very natural but automatic. It’s not a behavior I choose at all!

That said, amazingly, in no way do I feel I possess him nor have I EVER felt that I possess my son! His father and I raised him to possess himself and he does, even though he’s going through judging himself in a perfectionist manner at the age of twenty.

I think that possession is a misnomer because of our materialist based, capitalist system of ownership and human slavery. It’s not a minor issue because it’s the basis of legal marriage and taking someone else’s name. Men and women tend to behave as though they can control one another in a relationship which is completely unrealistic and offensive. This is where the resistance to possession comes from. It’s also a huge political issue that affects the status of everyone, including men that tend to feel controlled by women.

Let’s move to create bonding that includes freedom of movement, freedom to be yourself, freedom to express how you feel and freedom to express yourself sexually in different ways and stop talking about possessing or controlling anyone, even in a sexual relationship. The way I see it, bonding in love is a stronger force than possession or control anyway. You won’t feel the need to possess or control someone if the emotional bond is there. You also won’t feel the need to prescribe “monogamy” to it because if you are bonded and love someone you’ll want to be with them. And if you don’t, there isn’t enough sex with novel people in the world to satisfy your longing. Don’t ki

d yourself about that!

If you have bonded, your quality of life skyrockets! I’m going to have that which means I need a mate with whom I can feel emotionally bonded and passionate. Once there is a strong emotional bond, that can morph and change into spiritual affinity and you won’t even need to use the word loyalty because you’ll naturally be on the same page in terms of your values even as your body and emotions change. It’s all good.