I believe studies have shown this about women. The initial hormone high of attraction falls away if there is no contact, no talking (hearing his voice), you don’t see him and you receive no communication. That has been the case here. Because I’m intuitive, that has all kicked in very strong and I recommend following your intuition to women when it comes to these situations. Reason being, your body, and brain send certain signals based on ancestral DNA and successful reproduction in terms of sexual attraction and your soul intuition sends another. It’s unfortunate that the two are not always on the same track but I can tell you they are not.

I texted him and left one call regarding my Zoosk account getting hacked and being paused. I have heard nothing back. If a man isn’t as active on the account after he meets you, that’s a sign that he’s focused on you, but he was back on and not contacting me directly. Then I assume he was out in the alley again but I don’t know for sure. Ok! I wasn’t. I was watching him. What I know about men is, if they have not had sex with you and they don’t think they’re going to have sex with you in the immediate future, they have absolutely no motivation for communicating with you past the first date.

There is no way two people can value each other as human beings after only one date or even a couple dates! That means women, that even if you wait for a couple dates to have sex with him, there is no way you’re setting a tone for a relationship, love, or bonding to happen and he will continue to be an alley dog, learning nothing, and finding any b…. he fancies online who will give it to him quickly. That is men’s nature. They are not to be judged for that. I’m making the point that if you want something different and he seems like a man to reproduce with or love, you cannot have sex with him right away. He needs self-discipline, not indulgence. If he shows no interest then and moves on, just because you wouldn’t have sex, he was not your reproduction type anyway. And usually, a man will say up front that he IS looking for a relationship which could mean several things. Mostly, he may want children and a home. Men want that too. Just know that he will be a softer, more domesticated type and not as virile.

My situation is somewhat different because I’m not looking for a man to reproduce with. However, it’s the same in that I only want bonded sex, not alley sex. I need love with a man to be turned on and that is absolutely how I’m wired. I’m monogamous and want a lover but I don’t like marriage. I know who I already love and who I want to share myself with for the second half of my life; my twin flame. But he’s not communicating with me very much or at least he’s not initiating at the moment and lives 1800 miles away. For me, it’s a matter of being patient because I know what’s going on with him. What I can tell you is that he is very strong in my psychic, etheric space and that really counts with Twin Flames. So why am I on Zoosk? I’m testing myself and the energy. I also want to hang out and date to be social. I like men. 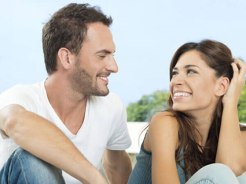 Another thing about women is our sexual interest has everything to do with a man’s voice and how he talks to us. It just is. This is huge for men to accept if any of you are reading this. Maybe women are different on this but I don’t think so. I think all women are very strongly affected by the tone of voice and sincerity of voice from a man. We can tell when you’re lying which is most of the time. If you are an honest man and tell the truth, that is very sexy and very impressive. Just don’t say, “Yeah, I think you ARE fat! And by the way, your ass is big!” lolololol. My male friend in another state who I text and talk with said to me, “We lie because it works!” I said, “No it doesn’t! We can always tell and then you come down a few notches to us and have less chance of sex with us.” He must be referring to lying working on women that aren’t too bright. Don’t get me started on that.

It’s a good thing I really love my single life and have made a life for myself. Dealing with men is really so much gaming and brain mush. My Zoosk fellow is still up north for the week working. The weather in Michigan has been “stay off the roads!”. He told me he would be gone for a week after our first date. Maybe when he’s done with his project he’ll contact me. I honestly don’t care that much and have no emotion invested in him because he’s not talking to me. Men are unpredictable. I still think he’s super cute but we’ll have to have a second date and see how the vibe is since he wouldn’t talk to me all week. And maybe I’m not that interested now. I’m unpredictable too. This is the dance we do. Just don’t chase him, women! Let him come to you. Again, think of a dog and how you’d deal with one. My son’s father is the one that made me accept that visual. I would never suggest that about men but that’s because I’m idealistic. Now that I’m middle-aged I’m realistic.